This article describes how to incorporate split tunneling into your network. If you would like to select specific network subnets to go through from the client to the Perimeter 81 network, instead of full tunnel mode (where all the traffic is encrypted and proxied through the Perimeter 81 network), you will need to manually specify which subnets you’d like to include through the tunnel. 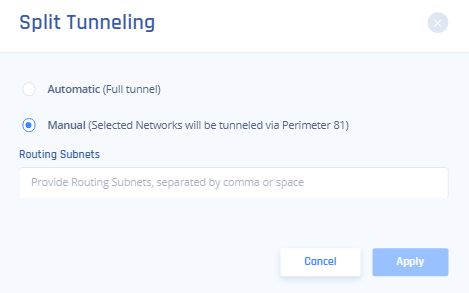 Important
Some Operating Systems have limitations to the amount of Split Tunneling they allow on a VPN client connection,If you have defined more than 25 different subnets, make sure that any end-users connected using the agent are operating on either OpenVPN protocol or WireGuard protocol.
In any case, it is not recommended to insert more than 254 different subnets.

After defining the split tunneling subnets, this information will be available on the Networks page.

Was this article helpful?

By entering and using this site, you consent to the use of only necessary cookies to enhance your site experience and improve our services.